Message Sent
Thank you for your inquiry. We will respond to you as soon as possible.

With gift planning, you can provide long lasting support for Children's Health ℠ while meeting your own financial goals.

You are at: Planned Giving > Gift Options > Donor Stories

She Didn't Do It For The Money 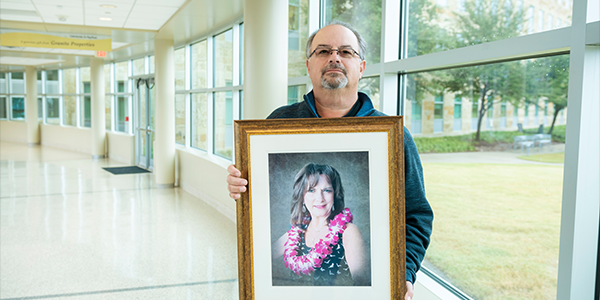 Richard Drouillard leaned back in the plastic chair and pointed behind him in the direction of the Emergency Depart at Children's Medical Center Plano.

One day, his wife's name will hang at the check-in there.

Months had passed since Dawn Drouillard's death from an aggressive bone cancer, and Richard can't understand why this happened.

Dawn was a wife, a mother, a sister, a daughter. She was an IT Director at Securus Technologies. She also was an ER Technician at Children's Health.

As a planned gift, Dawn left a $150,000 insurance policy to Children's Medical Center Foundation to be used to further the hospital system's mission to provide world-class care and help make life better for children.

"She was glad we planned to spend our money to help future generations," Richard said. "We didn't think it would happen this soon though. That was the sad part."

A private person, many of her friends and colleagues didn't know until the last couple of months of her life that she was dying.

Some didn't know Dawn held a side job for more than a decade working in the Emergency Department at Children's Health, coming in at night after she left her full-time corporate day job and on the weekends.

"She loved the children. She loved helping the children," Richard said of her work at Children's Health. "She didn't do it for the money."

One of the first things Richard noticed about Dawn was her athleticism.

It was the summer of 1984, and they both had moved into the same apartment complex in Plano.

"She knew how to throw a baseball," Richard said. "And not like a girl."

A track star at her Iowa high school, the couple met playing racquetball in a tournament at the apartment complex where they lived.

They had both moved thousands of miles from home that year - he from Canada and she from Iowa - and were looking for a fresh start in Texas.

Their first date was dinner and a showing of "St. Elmo's Fire."

A year later, just before Christmas, Richard asked Dawn to marry him in the apartment complex where they met over a delivery pizza dinner.

"I didn't get down on one knee. It was a simple 'Would you like to get married?" Richard said.

A small church ceremony on July 12, 1986, surrounded by their immediate family -- followed by a reception at the apartment complex where it all began -- united them officially as husband and wife.

"And from that point on, we grew closer every year," Richard said. "We did everything together. We were best friends."

Dawn built a career in Information Technology, starting at The Staubach Company and rising to the rank of IT director at Securus Technologies - a prison communications firm.

But in college, Dawn dreamed of being a doctor or nurse.

When their daughter, Carly, went to college, Richard took up golf and Dawn went back to school, studying to be an Emergency Medical Technician.

"She always wanted to do that and felt like she missed out," Richard said.

For about a decade, she worked as an ER Technician at Children's Health, straddling working night and weekend shifts at the hospital while carrying a full-time corporate job.

But for Dawn, there was always more to do. In addition to working two jobs, she cared for her family and friends and volunteered at her local church, The Catholic Community of St. Elizabeth Ann Seton in Plano.

She had meals delivered to her elderly parents. She also made laminated cards for them and Richard with their daily medications and dosages. Richard carries his in his wallet.

She wanted to make sure they were taken care of, even if she was no longer here to do it.

"You don't know my wife," Richard said, chuckling, when asked how she did it all. "She was an amazing woman. She had energy to spare. She said sleeping was a waste of time."

In an email on July 10, 2019, to the staff at Securus Technologies telling them of Dawn's death, CEO Robert Pickens wrote that the last time he saw Dawn she was in the hospital and knew the end was near. She was retrospective and focused on her actions in life.

"And she asked me if I thought she had done enough in her life to get into Heaven," he wrote. "I assured her that she had done far more than enough."

Let us help you with your gift plans