Message Sent
Thank you for your inquiry. We will respond to you as soon as possible.

With gift planning, you can provide long lasting support for Children's Health ℠ while meeting your own financial goals.

You are at: Planned Giving > Gift Options > Donor Stories 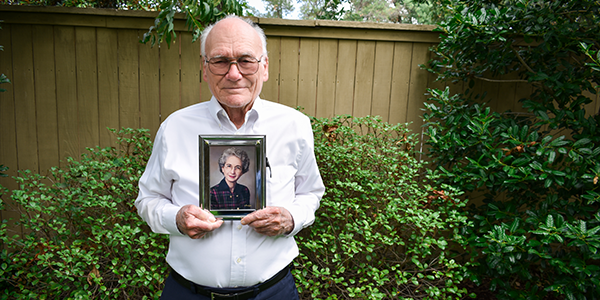 "When God doesn't give you children, he gives you the opportunities to help other children," Arlton said.

She looked at the camera - a soft smile on her lips, her hair short and curled and hands clasped in her lap.

"Yep, that's Nancy," said Arlton White of his late wife of 55 years, Dr. Nancy White, as he surveyed the black-and-white photo of medical staff at Children's Medical Center of Dallas in 1964.

"And, I think that's me!" he said, chuckling as he pointed to the man - front row, far left - casually leaning in a chair with a mischievous slight grin and eyes locked on something out of the photo frame.

More than five decades have passed since that moment was frozen in time. It's also been three years since Nancy's death.

Arlton still gets teary-eyed when he talks about his wife - a female doctor during a time when there were very few.

Arlton and Nancy's investment, along with the support of other donors, will result in ground-breaking discoveries through the Children's Health Clinical Research Program as physicians and scientists seek to better understand the basis of diseases like cancers, and how to best treat them.

"Philanthropy is a critical piece to clinical research as traditional funding sources have decreased," said Brenda Paulsen, Vice President of Research Administration and Professional Service Operations at Children's Health. "Thank you to Arlton and Nancy White and other supporters for believing in the power of research to bring families hope."

This year, the Clinical Research Program has over 1,150 active studies that involve more than 11,500 children - a 55% increase since 2015. But operational funds available to support clinical research have continued to decrease.

"It seemed like the best place to put my money. Gene therapy is a remarkable advancement. It opens the door for so much," Arlton said.

Previously, Arlton donated a $100,000 matching gift to Children's Medical Center of Dallas to support the May Smith Scholars Program, which provides financial assistance for baccalaureate students interested in pediatric nursing.

The $3 million planned gift was something the couple outlined when deciding how to divide their assets.

Arlton built a sprawling ranch home in Far North Dallas in anticipation of the growing family he and Nancy dreamed of, but the couple wasn't able to have children.

He said Nancy would be proud that he's spending their money to take care of future generations.

"When God doesn't give you children, he gives you the opportunity to help other children," Arlton said.

Arlton met Nancy at church on March 19, 1961. He still remembers the exact date.

A photo of the couple sitting side-by-side on a wooden church pew hangs in a hallway at their home commemorating the event.

"50 Golden Years Together. The church pew where it all began," it reads in black script.

But Arlton had his eye on Nancy before formally meeting her at church. He'd seen her studying at the UT Southwestern medical school library when he'd make trips to research how to stimulate muscles with electrical pulses for his work at Texas Instruments.

"I'd see this little lady sitting there - sometimes with her head down asleep," he said. "She'd pop up, and she'd study for another four hours. Then her head would go back down. Oh, she was devoted."

Nancy made Arlton wait nine months before walking down the aisle. She wanted to be certain he would support her focus on her medical training. She wasn't sure he'd be patient while she pursued a career in medicine alongside a handful of other women.

But he respected her work. It's one of the reasons he fell in love with her.

Their wedding day a week before Christmas was a blur to Arlton. He only remembers dancing around the house signing "Tis' the season to get married…" with a giddy smile on his face.

When she was a little girl, Nancy wanted to grow up to be a medical missionary in Africa.

Nancy began her pediatric training at what was then Bradford Memorial Hospital for Babies. She watched as Children's Medical Center of Dallas campus was built near Parkland Hospital and finished her studies there, including a fellowship in pediatric cardiology in 1968.

Arlton remembers how at that time, there were no facilities for female doctors to rest when on-call, so Nancy often slept on a bench in a hallway during her shift.

Years later, when Nancy finished her training, she couldn't find a male physician willing to hire her.

She worked for the city of Dallas at the Martin Luther King Jr. Community Center for 12 years before establishing her own private practice in the Park Cities area, which she retired from in 2005.

"She always gave the children a little round cookie with a hole in it," Arlton said, smiling. "She'd look in their ears and say, 'Well, I don't see any potatoes growing in there.'"

Arlton was proud of Nancy's perseverance to pursue a career she loved. He remembers how other doctors would chide Nancy for spending what they thought was too much time with her patients.

"They were thinking she couldn't make any money that way. But she wasn't there for the money," he said.

Let us help you with your gift plans